“After the Second Lesson, I Was Hooked” 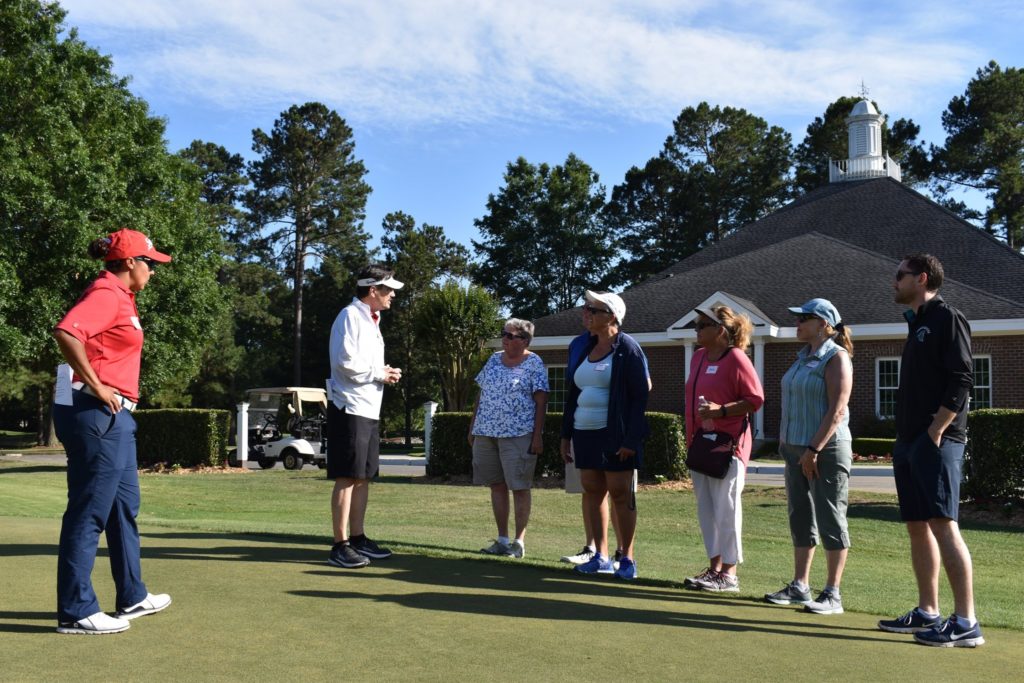 Suzanne Sarlo is a 5-foot tall retiree from Massachusetts. She’s lived in the Myrtle Beach area for less than two years.

And she is the tip of the spear.

Sarlo is one of 20 or so players enrolled in “Introduction to Golf,” a simple-but-effectively named teaching program that falls under the umbrella of Project Golf. The latter is a multi-faceted approach to growing the game from four separate societal prongs, each with different needs and wants.

But here at Legends Golf & Resort in mid-November – standing alongside others donning puffer jackets and vests and jeans and work clothes – Sarlo was every bit of what Phase One was aiming to address.

“I had never, ever picked up a golf club before,” she said after the second session of the six-week class. “I was nervous. You’re always nervous because you’re meeting new people. You don’t know if they’re going to know more than you. You don’t know what it’s going to be like.”

On this day, Sarlo spent a solid portion of her time listening to Stefany King, the Classic Swing Golf School’s juniors director and the lead instructor of its women’s groups. Those titles were relatively inconsequential on this day, as King was responsible for working with men and women of varied ages and natural ability at a pitching and chipping station.

Another group was across the way at the oversized putting green behind the clubhouse, a third on the driving range taking full swings with short irons. They rotated between different instructors, some of them with their own gear and others borrowed.

However, under the lights at Legends, nearly all of them had something crucially important in common with Sarlo.

They had never played golf before this class. To understand the Intro to Golf class, you first need to know about Project Golf.

To do that, you need to flash back to 2017, when Golf Tourism Solutions Founder Bill Golden had an epiphany after meeting with a few of his cohorts from around the country.

“In a relatively short period of time – maybe 10 years, maybe less – we’re going to have a significant number of golfers age out,” Golden said. “In that age category, that’s where the majority of rounds of golf are played. What the national golf entities will tell you is that there are all these millennials who play golf. But if there are 1.5 million golfers under 30 now, it was 4.5 million 15 years ago. The math doesn’t work.”

After who knows how many conversations with who knows how many different power brokers, Golden had enough of an idea to proceed with what was later named Project Golf. It was incorporated in the spring of 2018, soft-launched last fall and then began fundraising toward its goals before the end of that calendar year. Gary Schaal, the former president of the PGA of America and a member of the Carolinas Golf Hall of Fame, was appointed Project Golf’s executive director. Gene Augustine, a career Marine with a newfound professional involvement in the game, became the director.

By that time, it was established that Project Golf would encompass four angles of growth.

How to attract potential juniors, veterans and special needs golfers would all be addressed. But while each of those factions required either extensive training and/or some more time to figure out how to make the attraction work, the fourth area to derive growth was already right there in front of the organization.

Project Golf (and many of the national groups) refers to players like Sarlo as “latent-demand golfers.” In short, they are prospective players who had always found a reason to avoid taking up the sport. Maybe it was time. For others, effort. What was discovered over and over, though, was another problem that needed to be tackled.

Potential players were concerned with aspects of the game experienced ones consider preliminary. To first-timers, everything from the bag drop to the pro shop to the practice range to hitting up a retailer can be daunting.

“Golf is a tough sport to break into,” Augustine said. “Day one, lesson one, we’re trying to get rid of some of the discomfort – all of these are things that golfers take for granted but people who haven’t played this sport feel really uncomfortable about. Then we’d ask what else they felt uncomfortable about.”

Breaking down those barriers was priority No. 1, so no question was off limits.

And very early on, the strategy was producing results.

WHY IS IT IMPORTANT? The smallest of the bunch included 12 people, the biggest 23. Overall, more than 150 people participated in 2019, Intro to Golf’s inaugural year. That’s good for quick business hits, sure, but what about the long haul?

Augustine called it a “cradle-to-the-grave mindset.” Golden spelled it out slightly differently.

“The initial idea was that the national golf community is underutilizing instruction,” Golden said. “If you and I were going to go skiing and we hadn’t skied before or hadn’t gone skiing in 20 years, we’re going to get some instruction. We’re not going to go down the black diamond slope right off the bat. There’s no better example of that than golf. It’s a long-term hobby. It’s a life skill. But less than 10 percent of golfers had ever received a lesson. That made no sense to me.”

What did make sense, he said, is that the standard instruction model doesn’t work for enough of the would-be golf populace, or isn’t economically feasible to many latent-demand golfers. It provided that demographic another excuse not to play. Instead, Intro to Golf will allow participants an easier inroad to the game. Down the line, they’ll have an easier transition to the more traditional instruction routes, being paired up with like-minded teaching professionals, and then increase their chances for more success there, too.

So far, Augustine’s tracking has proved it is working. After several predetermined windows, graduates are polled. Have they played a round? If so, how many times? Have they purchased equipment? Have they continued instruction with someone else?

Not every player had become a regular, of course, but more than a handful now fall into the avid golfer category, having played at least five times in the two months after the conclusion of their final class.

Sarlo, for the record, was making her second run through Intro to Golf after getting sized for some clubs more appropriate to her height. It was a different path than most, perhaps, but it was a path that ultimately led her to taking up the game long-term.

“After the second lesson, I was hooked,” she said. “I still didn’t know what I was doing. I still don’t know all the terminology. I’m still learning. That’s what got me the first time around. They took you from the basics right from the very beginning and taught you what to do.”

Ian Guerin has been a Myrtle Beach-area reporter, writer and freelancer since 2005, concentrating on golf and local sports. His stories have been honored by various state media organizations, and in 2016 he chronicled one of the nation’s most prestigious high school basketball tournaments with his book “The Beach Ball Classic: Premier High School Hoops on the Grand Strand”