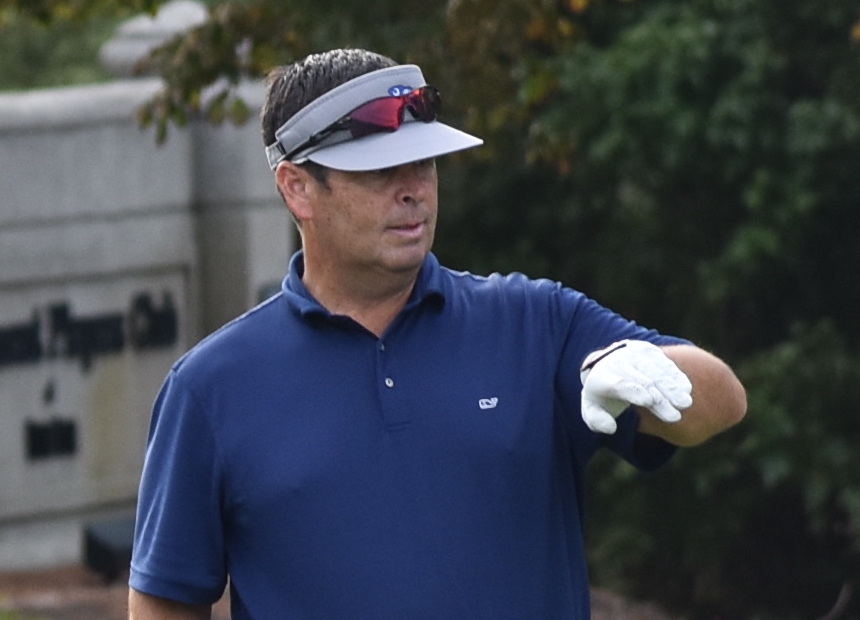 Golf was never just a hobby for Gene Augustine.

When he started playing regularly in his mid-20s, he studied it. When time finally allowed him to join a private club, he was asked to join its board, then worked his way up the ranks, serving as the president.

And when he “retired” from his first career, Augustine decided to push all his chips toward the middle of the table. On the outside, immersing himself in the industry may have looked like a gamble, or possibly a way to pass the time. No, for Augustine, this was personal.

“Golf was such an oasis for me. It was a place for me to relax and just completely turn off from the high-pressure, high-intensity sort of lifestyle I was going through at the time,” said Augustine, the director of Project Golf. “It felt like one day I was in Afghanistan to weeks later being on a golf course by myself in the evening. The serenity of it was so calming, so therapeutic. I’ve never forgotten that.”

Augustine’s memory bank is indeed pushing the brim after a career as a Marine Corps officer, and then as an associate professor at the Naval War College. But at the ripe age of 50, he left the military lifestyle and decided it was time.

He was ready for golf.

And the game was ready for him.

In a span of just five years, he enrolled and graduated from the Golf Academy of America in Orlando, served as a president at the Myrtle Beach campus and then was a natural fit for a new and innovative venture. Project Golf, in fact, had been looking for someone who could bring his unique set of skills to the table.

Even a year ago, with an industry-idyllic plan in place, Project Golf was little more than a concept. Its founders – board member Bill Golden and Executive Director Gary Schaal, among others – wanted to fight off the trends that hadn’t been so kind to the game.

“I think I was conditioned by all the crashing news during the recession that the golf industry was suffering,” Schaal said. “We were growing the game accidentally in the ‘80s and ‘90s. Courses were hot and TV was hot and there was Tiger. Then, the bottom fell out and we had to start over.”

In other words, holding onto the past is frequently seen as golf’s doom.

Myrtle Beach had already seen its share of closed courses, some necessarily so. However, the market’s overall livelihood was going to need something more, something fresh. That means new faces across a diverse landscape that had previously been untapped.

One of Project Golf’s first initiatives was an Introduction to Golf class, one that would take 25 players or fewer and run them through six weeks of 90-minute sessions. New players could get some instruction on the course, but also learn the ins and outs of the preliminary parts of the games. Nine different courses served as home sites in 2019.

A large number of instructors from the area’s teaching schools joined the fray. It was unlike anything here, maybe ever.

They were also going to be advocates for inclusion. Common sense has told industry leaders that casting a wider net would only help sustainability. It was also the right thing to do.

Project Golf went to work focusing on the latent-demand golfers who would find a home in the Intro to Golf class, but also to juniors, those with special needs, and veterans – both healthy and disabled – returning to civilian life.

“He just checked all of the boxes, no question,” Golden said.

‘HEART BEATING FOR THE VETS’

Old habits are hard to break.

“Cease fire, cease fire,” Augustine hollered during a November session of the Intro to Golf class at Legends Golf & Resort. He was pushing a PVC pipe in the shape of a field goal post around the green, sweeping range balls that had been chipped up to the putting surface by six beginning golfers into clusters to be used again.

He never would have been thrilled as a desk jockey, so he is hands-on when it comes to the Intro to Golf classes.

Still, this wasn’t exactly his environment of old.

After graduating from the State University of New York at Cortland, Augustine joined the Marine Corps as an officer. Over the next 20 years, he served in Operations Desert Shield and Desert Storm in the early 1990s, Operation Silver Wake later that decade and then Operation Enduring Freedom post-9/11. All told, he spent time in Japan, Thailand, Korea, Saudi Arabia, Kuwait, Iraq, Afghanistan, France, Germany, Italy, Spain and Greece under the banner of service.

He retired as a Lieutenant Colonel, having earned a Bronze Star and medals for Meritorious Service, Naval Commendation and Joint Commendation. After that, he taught for nearly eight years at the Naval War College in Rhode Island. That’s 28 years of his life preparing for war, engaged in it or teaching others how to do the same.

One month shy of his 51st birthday, he and his wife, Kathleen, moved to Florida and he enrolled as a first-year golf student. He finished the Golf Academy as its December 2016 Valedictorian and was immediately offered the campus president job in Myrtle Beach, a place he’d only be to a couple of times prior for quick buddy trips.

That ultimately led him to Project Golf.

Schaal, himself a veteran of the Vietnam War, saw the potential, especially when it came to an organization that has planted the seeds of bringing more vets into the fold.

“He has a heart beating for the vets,” Schaal said. “He’s a perfect fit for sitting at the desk he’s sitting at. I sit in meetings and say ‘This has got to be done.’ Gene will look up and say ‘I’ve got that covered.’ I think you can lay 90 percent of that on his military background.”

Together, Schaal and Augustine have already met with a number of qualifying groups, and they’ve formed a partnership with PGA H.O.P.E. (Helping Our Patriots Everywhere), a program that helps wounded vets use golf to their advantage. In the coming months, that phase will be formally unveiled.

It holds special meaning for Augustine. After all, he had long appreciated the mental therapy the game had given him.

Ian Guerin has been a Myrtle Beach-area reporter, writer and freelancer since 2005, concentrating on golf and local sports. His stories have been honored by various state media organizations, and in 2016 he chronicled one of the nation’s most prestigious high school basketball tournaments with his book “The Beach Ball Classic: Premier High School Hoops on the Grand Strand.”